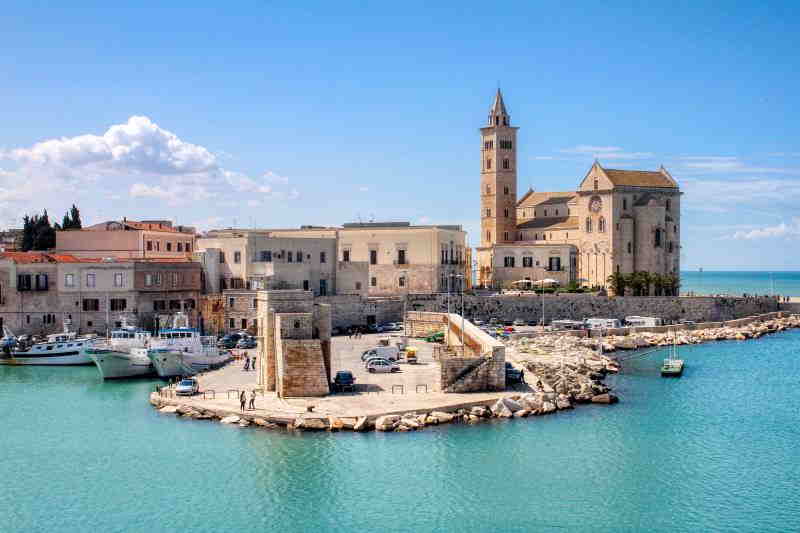 Known as one of the finest and most elegant coastal towns in Italy, Trani has much to captivate you. With its Puglian Romanesque cathedral facing the sparkling blue sea of the Adriatic and a Middle Age old town with a colourful fishing harbour, a day tour of Trani is something you really need to experience when holidaying in central-northern Puglia.

Charming Trani will enchant you with its brightness. The town is particularly famous for its pietra di Trani, a local limestone which is used all over Italy. All the palazzi, the Middle Age church, the castle, and even the private houses are made out of this local white stone, which creates the beautiful brightness when the sun reflects off it.

The contrast of colours between the stone and the blue sea will make you fall in love with the simplicity, style and elegance of this town. Trani is also famous for its magnificent cathedral and for being the main cultural site of Jewish heritage in Puglia.

The beautiful Jewish quarter can be found in the medieval part of the city, where you can see traces of the past along more modern structures harmoniously side by side. Last, but certainly not least, Trani is extremely tied to the history of the Crusaders and Temple Knights, a history you will learn about while on your private tour of the city.

VISIT TRANI: WHAT TO SEE

A Greek pilgrim who spent much of his life as a solitary shepherd, St Nicholas arrived and died while on pilgrimage to Trani a few years before the beginning of the cathedral’s construction. The church was built above the pre-existing church of Santa Maria della Scala, which dates back to the 4th century, and it is still possible to visit this church today.

While on your day tour of Trani, you will get to see the typical Puglian Romanesque facade of the cathedral, a fine rose window with zoomorphic figures and a bronze portal from the 12th century made by local artist Barisano da Trani. The cathedral also has a high bell tower with a passageway beneath it, highly unusual for the Romanesque style; this part of the church was built in the following centuries.

Built from the local calcareous stone, this Middle Age castle directly faces the sea in defence of the city. The castle is a few minutes’ walk away from the cathedral and is part of the military system introduced by the Normans and Swabians in the 11th, 12th and 13th centuries.

It was during these centuries that pilgrims and crusaders from all over Europe were travelling to Puglia in order to reach the Holy Land; the towns along the coast were therefore fortified and their harbours widened. Constructed on the order of Holy Roman Emperor Frederick II, the castle spent many years in use as the jail of Trani, although it is also famous for being the location of Frederick’s son Manfred of Sicily’s wedding.

Nowadays, the castle serves as a Middle Age museum and hosts various events throughout the year, including a re-enactment of Manfred’s wedding, perfectly recreating the medieval atmosphere of the period.

Being a key point on the route used by the knights to reach the Holy Land, the Templars Church was where the knights swore allegiance to their leader before setting off on their crusade, and also served as the chapel for the Templar Knights hospital. While in the old town we will also explore the old Jewish quarter.

In the times of Frederick II from Swabia, the Jewish population were well tolerated, integrated and respected in the city, so much so that they built four synagogues that we can still partly see in the present day, including the Scola Nova, which was converted into a church before being converted back into a working synagogue in 2006, and the Church of St Anna, originally called Scola Grande, which now houses the extremely interesting Jewish Museum.

The port of Trani is filled with fine cafes, stylish bars and amazing fish and seafood restaurants. While on this part of your Trani day tour you will experience the everyday life of the local fishermen, observing them repairing their nets and selling fresh seafood from that morning’s catch.

Along the waterfront you will also have the chance to explore the beautiful Villa Comunale, a city park ideal for a leisurely walk while enjoying the wonderful views over the sea. From here you can also reach the Fortino of St Antonio, a small fort at the entrance of the harbour. The fort offers unforgettable views over the entire harbour and the cathedral, making it the ideal spot for taking those perfect holiday photos.

Due to Trani’s location by the sea, it’s highly recommended that you try some of the delicious seafood at one of the many fantastic restaurants here; your tour guide will happily give you some recommendations on where to go.

When in Trani, you should definitely visit the Jewish Museum and the Swabian Castle.