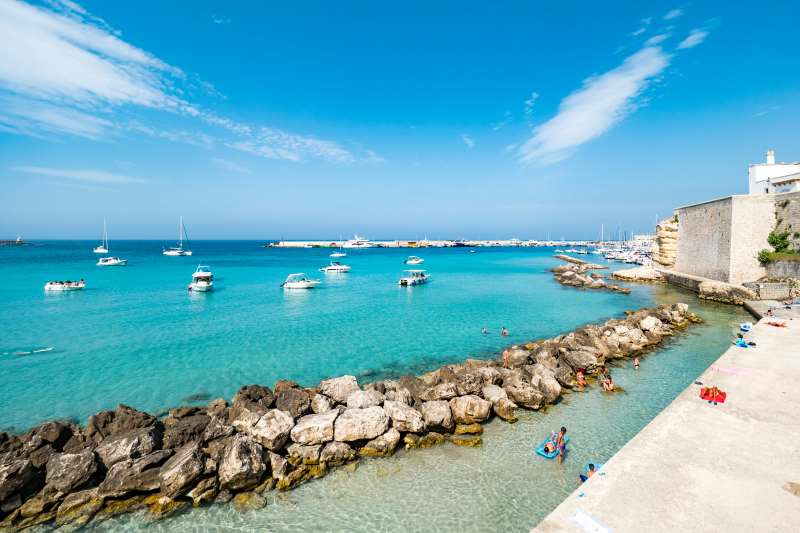 The most easterly town in the whole of Italy and therefore given the nickname ‘la porta d’Oriente’, the East door, Otranto is one of the most popular coastal towns in Italy and is included in the list of ‘I Borghi piú belli d’Italia’, a reward given to the most beautiful, small-sized Italian towns. A visit to Otranto is an experience not to be missed when travelling in southern Puglia.

For centuries, the town of Otranto was an outpost of the Byzantine Empire on Puglian soil, as well as being the cultural and artistic centre of the entire region. Nowadays it’s primarily popular as a coastal resort, and on a tour of Otranto, it’s not hard to see why.

Surrounded by the turquoise-blue waters of the Adriatic Sea, you will be enchanted by the beautiful harbour that surrounds part of the fortified old town. Your private day tour of Otranto will also include a visit to the city’s cathedral and its impressive Middle Age mosaic floor, which dates back to the 12th century and survived the Turkish invasions at the end of the 15th century.

VISIT OTRANTO: WHAT TO SEE

Known for its stunning mosaic floor dating back to the 12th century, the Cathedral of Otranto is one of the most fascinating churches in the Puglia region. Originally built in the Puglian Romanesque style in the 11th century under the Normans, the cathedral was heavily damaged during the Turkish invasion of 1480.

The only part of the cathedral that survived the destruction is the mosaic floor; running the whole length of the nave, sanctuary and apse, the mosaic was created by a group of local artists, including Pantaleone, a Basilian monk, and depicts scenes from the Old Testament and figures from medieval bestiaries.

These are arranged alongside a ‘tree of life’ which shows the timeline of man, from the Fall to Salvation. As well as this amazing piece of art, you will see the cappella dei martiri, a chapel built to honour the Martyrs of Otranto, the 800 people who were killed by the Ottomans for not denying their own faith in 1480. The bones of 500 of the martyrs are held in the chapel.

One of the most symbolic churches of the Byzantines in Puglia, St Pietro’s church was built in the typical Byzantine cross structure; its origins are uncertain, but some believe it possibly dates as far back as the 5th century. The current church dates back to the 10th century and is notable for its beautiful Byzantine frescoes, the oldest of which are the Lavanda dei Piedi, depicting a haloed Jesus raising the leg of St Peter, and the Last Supper. 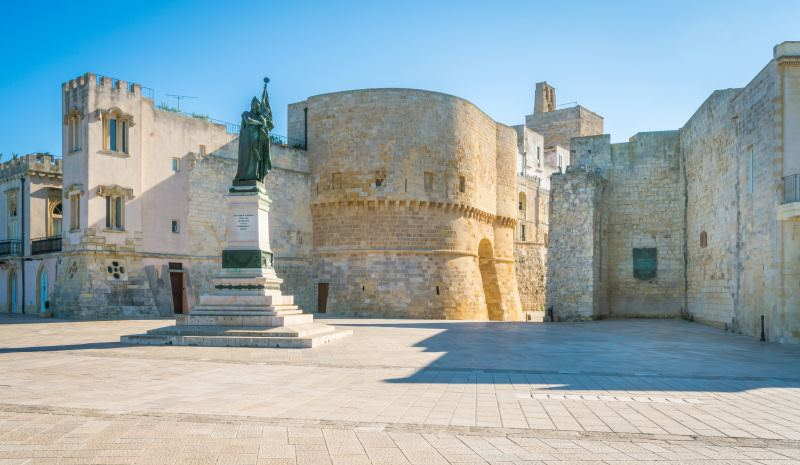 The fort of Otranto as we see it today dates back to the Aragonese and Spanish times, between the 14th and 15th centuries. After the Ottoman invasion in 1480, the whole fortress was rebuilt and extended with new military architecture included to prevent new invasions and occupations.

The castle then gained notice when Horace Walpole published his book The Castle of Otranto in 1764, which is now largely regarded as the world’s first Gothic novel. Nowadays, the castle hosts various exhibitions throughout the year. If you have an interest in history and military architecture, this is a place you should definitely visit when on a day tour of Otranto.

Located just outside Otranto to the south, Bauxite Lake is an absolutely stunning spot to take a stroll and enjoy the wonderful views. Up until the 1970s, the area was the site of the Bauxite quarry; once work at the quarry ceased, the small underground water courses gradually formed a lake. Surrounded by Mediterranean vegetation and the iron-rich red soil typical of the region, the lake is one of the best spots in the countryside of Otranto, especially for its amazing contrasts of colours between the blue sky, red earth and emerald green lake. 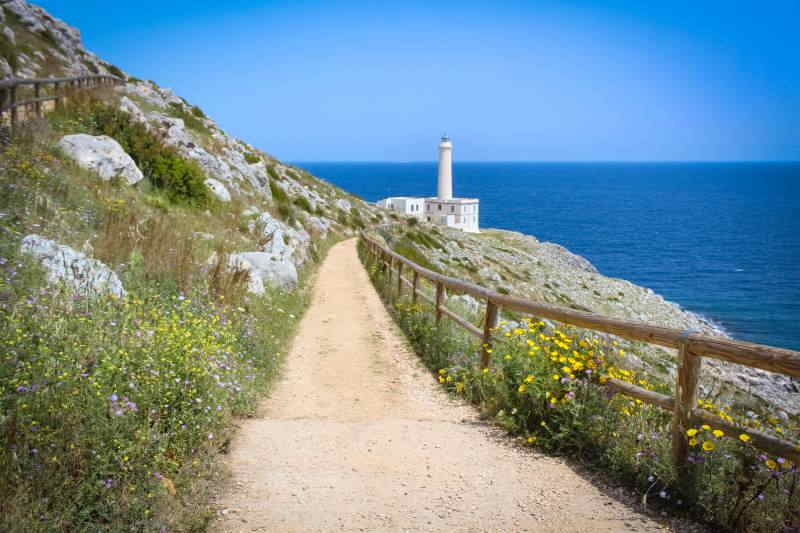 Travelling southwards from Otranto you will come to the lighthouse of Punta Palascia, Italy’s most easterly point. In order to reach the lighthouse, we will have to go for a short walk along the amazing rocky coastline, which offers breathtaking views of the Adriatic Sea; this truly is one of the most magical natural places in Puglia.

The lighthouse itself dates back to 1867 and was in operation until the 1970s; it was opened to the public in 2008 and is one of five Mediterranean lighthouses protected by the European Commission. Once we reach the lighthouse, as this is the most easterly part of the country it is possible to gaze out across the sea to the mountains of Albania 80 kilometres away – weather permitting.

Of course, being located facing the east means that this is the place to experience the very first sunrise of the Italian morning. This is a popular tradition that many of the locals, and more than a few visitors, take advantage of on New Year’s Eve.

Food tips: what to eat

When in Otranto, it is highly recommended you try the local pasticciotto or rustico, which is typical of the whole Salento area. Pasticciotto is a type of Italian pastry filled with ricotta cheese or egg custard; rustico comprise two layers of dough stuffed with a variety of fillings. This area is also well-known for its delicious seafood, especially sea urchin.

Salento is the southern part of Puglia and is a unique land nestled between the Ionian and Adriatic Seas. Here we have miles of coastline characterized by a wide variety of landscapes and architectural elements, such as long stretches of white sandy beaches, rugged cliffs, Middle Age watchtowers and castles overlooking the sea. There are also many picturesque towns, such as Gallipoli, Otranto and Santa Maria di Leuca. The inland is famous for its majestic Baroque-style churches and palazzi, built between the 17th and 18th centuries.

Exhibitions at the Castle