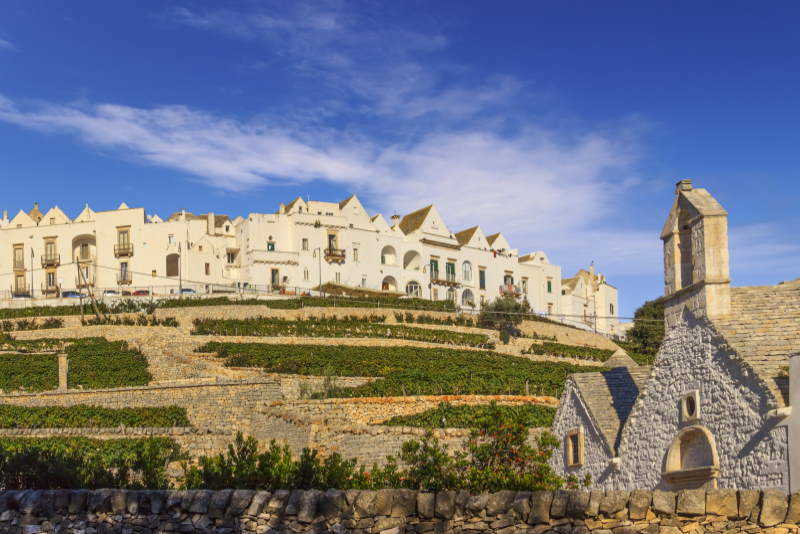 Officially one of the most beautiful villages in the whole of Italy, Locorotondo makes a wonderful addition to any Puglia vacation. With its pretty town centre and fame for exquisite wine, you can be sure that if you visit Locorotondo, you’ll be delighted by what it has to offer.

While nearby Alberobello is famous for its traditional trulli houses, Locorotondo also has its own unique architecture: cummerse. These houses with pointed gable roofs are uncommon in many parts of Italy, so you’ll be astounded by the unusual views.

Locorotondo – What to See 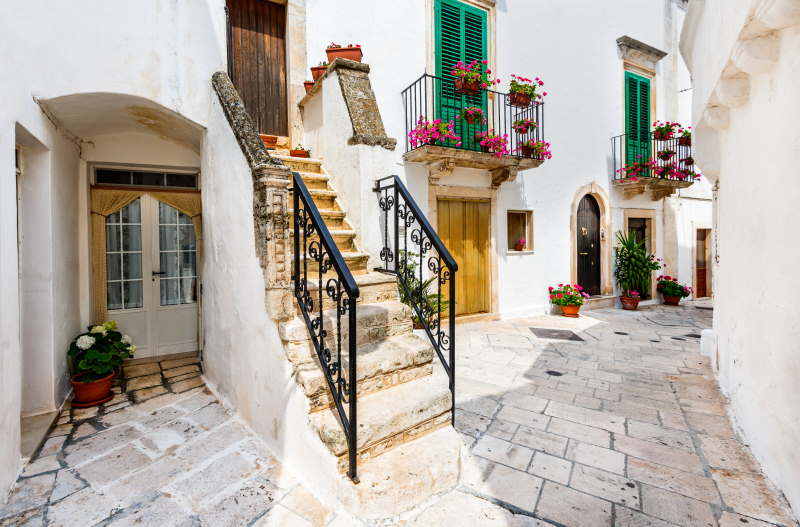 You could say that there aren't too many things to see when you visit Locorotondo; the town itself is the main sight. The historic old town is circular in shape – which is where the village gets its name – and you can spend a lovely couple of hours wandering around the whitewashed streets and admiring the beautiful architecture adorned with bright flower pots. But there are certainly a few sights that you’ll definitely want to add to your Locorotondo itinerary.

The most imposing structure in the whole village, the Mother Church of S. Giorgio was built between 1790 and 1825, although the site on which it stands has been the location of two other churches, the first one dating back to the 12th century. Built on a typical cross plan, the church’s highlights include its 16th century Neoclassical facade and its beautiful 18th century marble altar.

The closest thing the village has to a central hub, the Piazza Vittorio Emanuele is the perfect place to orientate yourself. Known for its charming cafe, here you can watch the world go by and then head to the pretty park just opposite where you’ll be greeted with stunning views over the surrounding countryside. The Piazza Vittorio Emanuele is also where you’ll find the tourist information office if you need any information, maps or leaflets.

From the outside, the Chiesa di San Nicola might not seem to be the most interesting church, but once you get inside you’ll soon change your mind. The interior is covered in amazing frescoes, some of them depicting scenes from the life of Saint Nicola, his experience as a hermit and his miracles, and in the dome you’ll see a series of paintings showing cherubs around the Eternal Father. If you look beyond the second arch on the left you’ll be able to see the stone bas reliefs of the ancient church of the crucifixion found in a cave just outside the village.

Translating as the clock tower, the Locorotondo Torre dell’Orologio is actually also a palace dating back to the 18th century. Once the home of the university, the clock tower was originally located on the bell tower of another church in the village, the Chiesa Madre di San Giorgio but was relocated to the Torre dell’Orologio and further embellished with a circular colonnade. The building has had many uses throughout the years, including that of a prison, and today is the home of the historical archive of the Locorotondo Archaeological Documentation Centre, which focuses on the Neolithic Grofoleo settlement.

The village may be more well-known for its churches, but this wonderful palace should also feature on any tour of Locorotondo. Its facade has many richly decorated balconies and portals with wrought iron railings, typical of the Baroque buildings in this part of the country. If you take a peek inside, you’ll also find a quaint courtyard with a staircase.

Designed in the typical cummerse style, this unique-looking church is constructed from a local limestone known as chiancarelle. The exact date of its construction is unknown, but it’s thought to have been built in either the 12th or 13th century. Its biggest highlight is its stunning central rose window, but you can also see a number of interesting statues inside.

Food is an incredibly important part of Puglian culture and Locorotondo is no exception. One of the best things to do in Locorotondo is visit the local food market, which takes place on Piazza Antonio Mitrano every Friday. Although the market is pretty small, you’ll still find an excellent selection of local food products, from fresh fruit and vegetables to traditional Italian cured meats. It’s great to have a stroll around the market – even if you’re not planning on buying anything – to soak up the wonderful atmosphere.

Aside from being one of the prettiest places in Italy, Locorotondo is well-known for its production of wine. Unlike most of the region which produces full-bodied red wines, Locorotondo is famous for its white wines made from Verdeca and Bianco d’Alessano grapes. The vineyards are beautiful in themselves, making them worthy of a visit, but a real Locorotondo must-do is doing a wine tasting; your Puglia tour guide can help you arrange this.